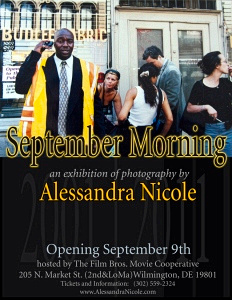 the poster for the opening of September Morning, an exhibition of photography from NYC on 9/11/01 by Alessandra Nicole

Last month I had a very important photography exhibit here in my home base, Wilmington, DE- I displayed photographs I took in lower Manhattan on 9/11/01. There was a small fury of press surrounding the exhibit that left me pretty exposed to my community; 9/11 was one event that shaped me in so many ways over the past decade but it’s not something I’ve talked much about since it happened.

I encountered countless setbacks and challenges in getting the exhibit onto it’s feet and now that it’s finally over and in the past after more than 11 months of planning I feel great relief! I’m fairly proud of myself; it was a courageous thing to have taken on- opening myself up to something I had buried many years ago and revisiting what it’s meant to me while being available to everyone else and what it’s meant to and for them as well.

I’d like to say I handled everything with perfect ease and grace but those closest to me know better! The stress, tears, anxiety, late nights, and nightmares I had from rehashing images I hadn’t looked at in decades (and don’t even bring up the loss of my film negatives!) almost compelled me to cancel everything several times. I could barely shoulder the expense of the two gallery shows 40 miles apart that I had committed to let alone the pressure I was putting on myself about it all. I relied on those around me much more than what’s comfortable for me- and perhaps for them as well! This exhibit really tested the fabric of who I am becoming, and did so right down to the closing reception the last day of September with an emergency venue change.

For me it was a month-long goodbye that took nearly a year and a lot of generous and supportive people in which to arrange. I made a ton of mistakes and learned much. I also risked and lost much because my event had to be my number one priority last month. If I weren’t so eager to sum the experience up into a tidy blog post for documentation’s sake so I can move on from it I might be inclined write a book about the whole thing.

The week after my sweet and humble closing reception, a week into October, I found myself in the midst of 4,000 protesters marching from lower Manhattan’s Zuccotti Park to City Hall in a movement called Occupy Wall Street. I was so into the energy of it and so electrified by the faces I was capturing that when I saw the huge sign reading 26 Federal Plaza in my camera’s viewfinder I was momentarily and visibly dumbstruck.

Ten years ago a 21 year old version of me stood in that very place after having been evacuated from 41 floors above Broadway with camera in hand, capturing faces on the streets and electrified by a very different piece of  history taking place. I hadn’t laid eyes on that building in more than seven years though it’s address has been engrained on my long term memory for the better part of my adulthood. I was also stunned to realize it was all in much closer proximity to the site of the World Trade Center than I had cared to calculate for the reporters that would interview me in the recent months leading up to my ten year commemoration exhibit. Certain particulars were a fog to me and I was content to leave it as such. I hadn’t been back to Ground Zero since visiting the site with my best friend back in 2003. 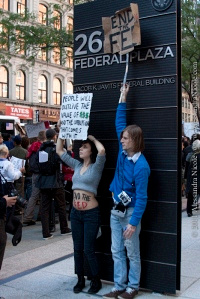 Occupy Wall Street protesters march past the Department of Justice building where Alessandra happened to be on assignment a decade earlier.

It suddenly dawned on me that ten years later I was running the same street with the same equivalent gear in my hands in the middle of another major event in NYC! I was amazed by the complete circle of it all! I felt like my amateur photographer 21 year old self had handed off an invisible baton to the present Me. A part of her had died in the ashes of fallen towers a decade ago- the resurrection of which this year was deeply painful. In a matter of the seconds that I had on hand in the middle of this enormous protest going on, I finally laid that poor afflicted girl to rest. With moist eyes I took the baton, kissed the memory, returned to the present moment and rejoined the march to Foley Square. It was just a few blocks, but the journey brought with it a decade’s worth of closure that I didn’t even know I still needed after having spent all of last month giving tours through my photographs and speaking openly (finally) about my experience. 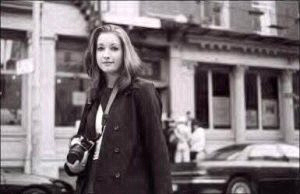 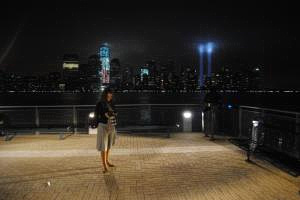 Waking Up from September Morning

Since Occupy Wall Street last Wednesday I have felt an inner shift within. I simply feel different. I’ve taken solace in my studio lately while working on a new project- illustrating a bit of prose I penned a few years ago- but mostly the isolation has been about me sitting with the awareness of a particular transformation I’ve made and finding my new legs within it. It’s something I have wanted for years. It’s been nearly impossible to articulate the experience to those closest to me. The very first gift given to me at age 4 as soon as I could master holding a pencil was the ability to wield the written word (while taking liberties to make up my own, occasionally!) Even in this form of self expression in which I am like a fish to water, I am floundering around grasping for the right sentences; the proper-est way to encapsulate something so profound that I am going through- and to find breath and levity within it so that I don’t get buried in my own avalanche.

It’s been an extraordinary 2011 for this girl. In the final days of my 31st year in this particular lifetime I find constant and beautiful gratitude for all I have seen, felt, tasted, touched, heard, loved, lost, embraced, and let go throughout my 20s. I want so many gorgeous and tender things for my 32nd year and for those around me. I feel so blessed to be a professional photographer! I feel blessed by my jagged journey to have gotten to this point and blessed by all the lessons and growing I’ve yet to do in and with it. I am grateful to be an artist- to have the luxury and the proficiency of multiple mediums at my fingertips that I can employ so that I may be able to articulate the simpleness and the complexities of how I see and feel this ever changing world around us…. so that maybe, just maybe I might be able to paint pictures and craft photographs to do justice to this crushingly vivid life where my written and spoken words fail.

I haven’t written in ages. Here’s to a fresh new chapter.